Mississauga has proudly called Kariya, Japan its sister city since 1981.

The sister city initiative began in the 1950s as a way to promote communication between cities around the world. The original goal was to reduce conflict between nations in the aftermath of World War II.

Having a sister city provides unique cultural and educational exchange opportunities for students, businesses and City staff. This partnership also enhances our City’s global reputation and trade. Over 100 Japanese companies now contribute to our local economy.

The Mayors’ gift exchange ceremony took place on June 30 in the Great Hall at Civic Centre. On behalf of the City, Mayor Crombie presented Mayor Takenaka with an Ojibway hand drum created by Canadian artist, Destiny Rae. In exchange, Mayor Takenaka gifted Mayor Crombie with a Japanese suit of armour.

The ceremony also featured a hand drum performance by Kim Wheatly of the Mississaugas of the New Credit.

Several honoured delegates and guests attended the ceremony, including: 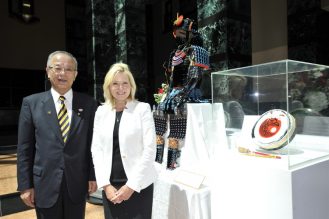 We celebrated the sister city 25th anniversary on July 7, 2006 from 10 a.m. to noon in the Great Hall at the Civic Centre. More than 65 guests joined us from Japan, including Kariya Mayor Kunio Enami. Many of our honoured delegates and guests have been attending this occasion since 1975.

Thank you to our 25th Anniversary event sponsors: