The City of Mississauga is ready to fight climate change with the City's first comprehensive Climate Change Action Plan which focuses on mitigation and adaptation actions.

Today, General Committee welcomed the City’s first comprehensive Climate Change Action Plan (CCAP). The plan focuses on both mitigation and adaptation and sets out actions for the City and the community to take over the next 10 years.

“Climate change is one of the most pressing issues of our time. We have already begun to feel the impacts of our changing climate, with increased flooding, rainfall, ice storms and some of the hottest summers on record,” said Mayor Bonnie Crombie. “While we’ve made significant progress in our efforts to mitigate its impacts, from declaring a climate emergency to replacing our street lights with LEDs, reducing our use of single-use plastics, installing solar panels and making progress on our commitment to plant One Million Trees, there is more to do.  With this plan, we are taking significant action to fight climate change so we can reduce our greenhouse gas footprint and create a more resilient future for Mississauga. I encourage all residents to join us in meeting our long-term goal of becoming a net-zero community.”

The plan contains ambitious yet practical steps to address climate change. There are two main goals:

“The Climate Change Action Plan is our response to the climate crisis and is our 10-year road map to support Mississauga’s long-term vision of being a low carbon and resilient community by 2050,” said Jodi Robillos, Director, Parks, Forestry and Environment. “The action plan takes a holistic approach. It includes actions to be taken by the City as a corporation, as well as actions for the community – those who live, work and play in Mississauga; together we all have a role to play in tackling climate change.”

The CCAP includes 21 key actions to be implemented within the next 10 years. Actions are grouped into five ‘action pathways’:

Based on current technologies and cost premiums, the City estimates that the plan’s actions will cost at least $460 million over the next 10 years. Implementation and funding of CCAP actions will be done through the City’s annual business planning and budget process.

“The City will play an important role in tackling climate change,” said Dianne Zimmerman, Manager, Environment. “Our plan features a number of specific actions including implementing a new Corporate Green Building standard that will help improve environmental performance, reduce costs and position Mississauga as a leader in green buildings. This new standard will see the City take a low carbon approach for new construction and major renovation building projects beginning in 2021. In addition, our Plan’s actions also focus on replacing the transit bus and corporate fleets with low or zero emission vehicles, installing renewable energy at municipal buildings, supporting our businesses to take action, and developing a public education program on climate change and emergency preparedness for our residents.

The City has already taken action on climate change:

The CCAP will go to Council for final approval on December 11. 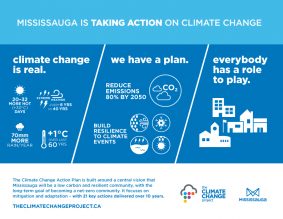