The Asian longhorned beetle has been eliminated in Mississauga after five years of no detection of this pest.

“Today marks a major victory in a long fought battle,” said Mayor Crombie. “This invasive beetle devastated our tree canopy in Mississauga, but we took action to stop its spread. I’m pleased that this insect is no longer a threat to our trees or our budget. It’s a good reminder that we must remain vigilant against invasive species by protecting existing trees and planting new ones.”

The Asian longhorned beetle was brought to Canada unintentionally in infested wood crates, pallets and packing material. First identified in 2013, the beetle was found in Malton, near the Toronto Pearson International Airport. Infected trees were removed, chipped up and processed to eliminate the ability of the beetle to destroy other healthy trees.

“For almost a decade, the Asian longhorned beetle has attacked and killed healthy hardwood trees in Mississauga, including maple, willow, birch and poplar,” said Jodi Robillos, Director, Parks, Forestry and Environment. “Posing a substantial risk to our parks, green spaces and wildlife habitats, thousands of infected and susceptible trees were removed to control the spread of the Asian longhorned beetle.”

To prevent the spread, residents and businesses were restricted from moving any tree material out of the regulated area of Mississauga. Movement of infected wood material could have accidentally spread the beetle to unaffected areas.

The beetle’s larvae fed on the trunk and branches of trees, and eventually filled the trees with holes causing the trees to die. Adult beetles fed on the leaves, bark and branch tips.

Reid added, “Mississauga’s tree canopy is diverse, however it is still vulnerable to pests like the Asian longhorned beetle. The City’s Forestry Section is dedicated to monitoring and managing invasive species in Mississauga. We’re committed to continue growing and protecting our urban tree canopy.”

Mississauga is home to over two million trees that provide an enormous range of benefits to human health, the environment and the economy.

For more information about other invasive species like gypsy moths or the Emerald Ash Borer in Mississauga, visit mississauga.ca/portal/residents/parks-invasive-species. To learn more the City’s tree planting program, visit onemilliontrees.ca. 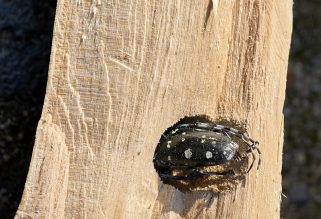 Asian longhorn beetle in the wood of a maple tree